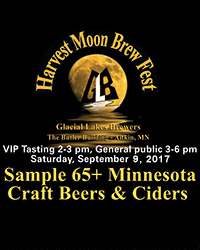 Having arguably become one of Minnesota’s most popular events, the Harvest Moon Brew Fest, now in its fourth year, returns to Downtown Aitkin, Saturday, September 9, with 60+ beer brands.

Rain-or-shine, this year’s Harvest Moon Brew Fest, hosted by Glacial Lakes Brewers, will take place in the parking lot of the historic Butler Building (301 Minnesota Avenue North, Aitkin) from 3 to 6 p.m., with a special 50 person only VIP Session from 2 to 3 p.m.

Some of this year’s beer companies featured at the event will include:   Surly Brewing Company, Castle Danger Brewery, Gull Dam Brewing, Jack Pine Brewery, Sociable Cider Works and Cuyuna Brewing, many returning for the fourth year in a row!  Watch for future additions as confirmations are received.

Ross Otto will be there with Hammerschlagen, a German game reportedly dating from 1940, in which several contestants try to hammer a nail into a stump.  Proceeds from the game go to Sylvia’s Children, a non-profit supporting a school in Uganda.

Acoustic artist Larry Fontaine will again be making an appearance at this year’s festival with his spin on songs from the 60s and 70s, as well as performing original songs.  Fontaine, on guitar and harmonica, will be performing songs by Bob Dylan, Neil Young and other various artists, including The Band and Van Morrison.

New this year will be the French Hillbillies who have performed at many Aitkin events, including the Farmers’ Market and in the Opera House. The pop, rock, folk, country and occasional French musical duo is made up of Sandy Lehman and her musical partner Alexandrine Harris.   One half from France, and the other from Minnesota, the French Hillbillies enjoy poking fun at the clash of the two cultures of two vastly different worlds, leading to great music and fun.

There will also be an array of tasty food selections available for purchase, live entertainment and games.  Paulbeck’s County Market will feature their various homemade bratwursts as well as having coffee for the Designated Drivers.  (This year Designated Drivers get a coffee mug from Brandl Motors as well as free coffee and bratwurst.)  The Beanery will also be participating again this year with their annual specials.

Tickets to the VIP Session are $40 in advance or $50 at the gate. All VIP tickets will include entry, at no additional cost, to the general admission portion of the festival from 3 to 6 p.m.

Tickets are on sale now at the Aitkin Independent Age, The Beanery, Security State Bank and online at https://tickets.beerfests.com/event/harvest-moon-brewfest.

All net proceeds from the event will go to the official beneficiary of the event, Sylvia’s Children, a 501(c)3 non-profit working to improve the lives of more than 1,000 children living in Uganda, Africa.